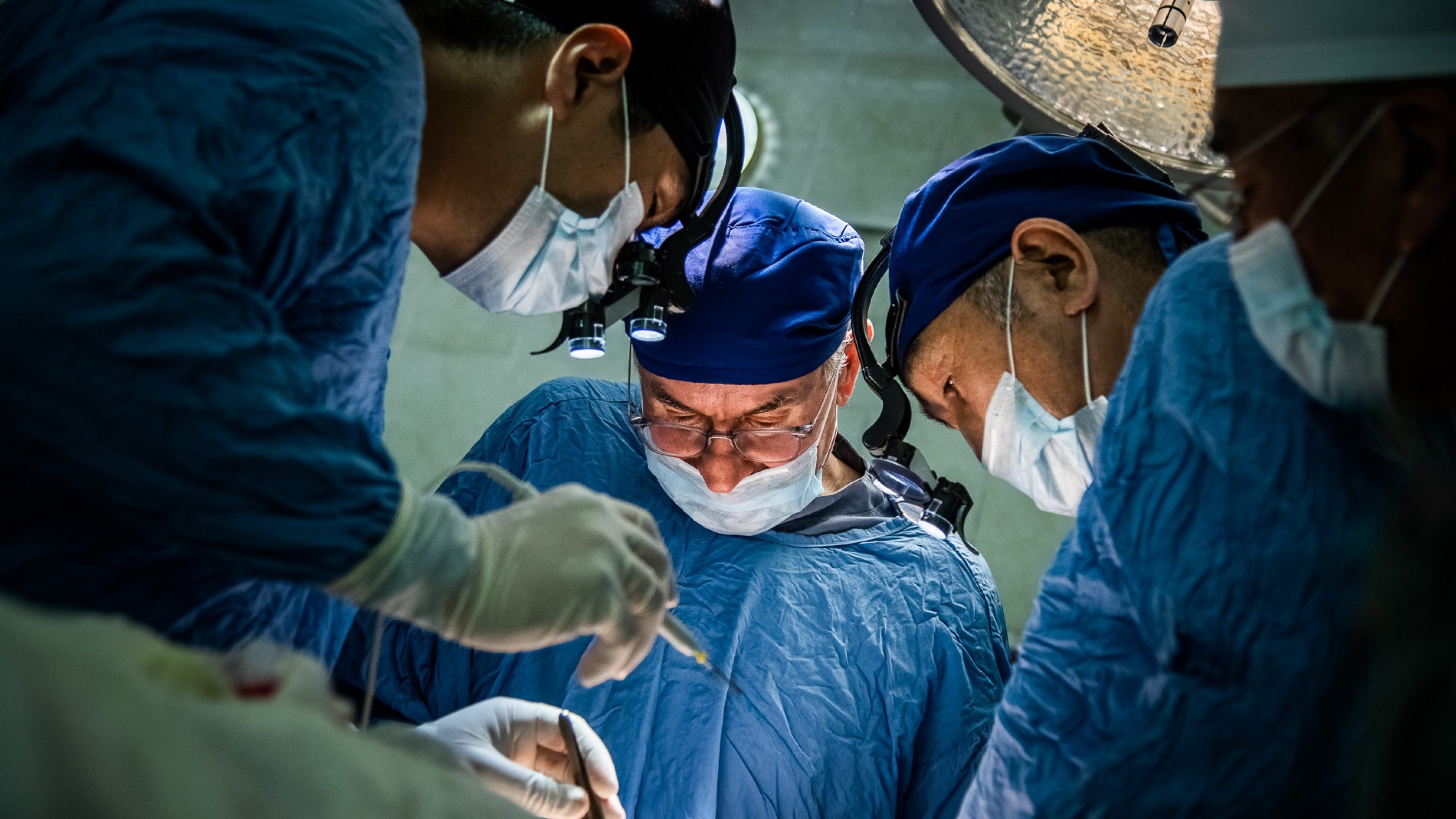 Danijar’s eyes light up during the briefing for the planned sagittal split osteotomy of the lower jaw. I can see the images of the surgery forming in Danijar’s mind as Prof. Beat Hammer explains each step of the upcoming procedure. Beat uses a model of the human jaw to show where the first incision will be made and explains where the procedure will be tricky. Danijar is elated and can hardly wait to be in the operating room with the Swiss professor. Hierarchy determines everyone’s position around the operating table: across from Beat stands Prof. Osh I, who is interested in the procedure, but is hardly involved in the operation apart from suctioning and preventing the patient’s lips and tongue from interfering with the operation. Danijar, who is the second assistant, stands on the metal base of the operating table in order to assist Beat. There are ten others there: Osh II, the surgical nurse, a surgeon from the hospital in Jalalabad, whose patient is lying on the table, the anaesthesiologist Nursultan, and Asamat. I will then be allowed in to confirm the final occlusion before the separated mandible is screwed back together. Also there are Yvonne with a camera and a second assistant in pink, who takes a selfie in the operating theatre and sends the photo out into the world with a small pink heart on it. There are some organisational aspects that could be optimised, as Beat informs that evening during the debriefing. This serves as preparation for the next day, when another sagittal split osteotomy will performed along with a chin adjustment. This operation proceeds in a much clearer and more orderly fashion. Osh I hands things over to his son. In future, he will limit himself to his main speciality, primary operations, which involve repairing cleft lips and palates. His position with respect to Beat will be entrusted to Danijar.

The patient who is anaesthetised on the second day of surgery has brackets without the standard hooks and additional Kobayashi ligatures: I have to put them on at the end of the operation so the jaw splint can be attached with the latex rings. Beat learns something new here too: in future, he will be able to attach these missing parts himself if the orthodontist has forgotten to do so. After lunch, we return to the dental clinic and see a number of cleft and syndrome patients. One after another, they are examined by the ENT specialist and speech therapist Marianne Campiche, along with Nurlan, who has been assigned to assist her. Schumagul translates the diagnosis and therapy exercises for the children and mothers. This is followed by my orthodontic assessment, compared with the experience of Beat, as a surgeon, which is observed with interest by Danijar, Azamat and Nursultan as well as Arstanbeck, a surgeon, who refers other patients from Jalalabad to us for examination. In between, Osh I can also be seen in orthodontics, discussing the position and tasks of Nurlan with Schumagul and Marianne and, along with Beat, assessing the cause of possible failures of palate and fistula closures. Prof. Osh I then introduces a five-year-old girl who, with the opening of her mouth limited to just a few millimetres, surely cannot eat properly. The tooth decay on her front baby teeth is not painful at present. But it is also clear that she cannot brush in between her jaws and that a dentist would find it impossible to repair or extract one of her molars. Beat agrees that the need to operate is urgent. He says that the bony adhesion that has formed in her mandibular joint will have to be removed in a procedure that will last at least four hours. Renewed adhesion will be prevented by inserting a silicone pad. The parents will then have to practise with their child on a very regular basis so she can achieve a certain amount of opening movement with her mouth. The procedure is not possible during Beat Hammer’s first visit, as both materials and time in the operating room are lacking. Beat has already promised he will return in May 2019. There is also an operation on the morning of the third day. The anaesthesia machine, which has been borrowed from cardiac surgery because the theatre’s own pumping machine has malfunctioned, works well until there is a power outage. Everyone must learn to live with the constant sound of the alarm. When the chief anaesthesiologist stops by, he switches it off so there are at least two minutes of peace. After power goes out in the entire hospital, the ventilator must be operated by hand. Beat remains as calm as everyone else and only says succinctly: “If we aren’t able to use the surgical motor again soon, then we’ll have to sew up the patient for now and close the operating room.” Cables are then laid across the operating room and some of the connections are reinserted. But before a generator begins to rattle somewhere, the electricity in the entire hospital flickers back on and everything can proceed as planned. Prof. Beat Hammer offers effusive words of praise and then leaves Osh I.